The Alpha Course is one of the best places to explore life and all its questions. Alpha is an interactive series of weekly sessions exploring the Christian faith, spirituality, and life. Each talk will look at a different question around faith and is designed to create conversation. Alpha is run all over the globe and everyone is welcome! The conversations are fun, open, honest, and judgement-free!

Alpha describes itself as a seven-week build-up to a retreat with a three-week follow-up.

St. Josaphat would love to welcome you on the first night of our next session of Alpha! Give it a try, even if only for one night. If you realize that Alpha is not for you, there is no pressure to come back!

Our next Alpha session is this Spring 2023 - join us Thursdays beginning March 9th!

Where do we meet?

Who is Alpha for?

Alpha is for anyone and everyone is welcome! People attend from all backgrounds, religions, and viewpoints. Some join because they want to move beyond religion and find a relationship with God. Others come for the long-lasting friendships built during an Alpha course.

How much does Alpha cost?

Alpha is free to attend! However, we like to say that the price of admission is to bring a friend to come with you!

What can I expect when I sign up for Alpha?

Alpha consists of a delicious meal, an engaging video series, and a thought-provoking discussion! You can expect to be welcomed into an opportunity to explore life, faith, and meaning where we would love to hear what you think if you're willing to share!

Why should I signup for Alpha?

Life can be challenging, confusing, filled with doubt, and lonely. Even when things are going ok, you can still be filled with questions (Why am I here? What is my purpose? Is there more to life than this?). Often time we don't know who we can talk to about any of these feelings or questions, or where is a safe place where we can go to learn more. Alpha is meant to be that space where anyone can come and experience a community devoted to honest and open conversation amongst friends. No question is off-limits and no one has to feel like they know it all. So why should you signup?

What topics will Alpha address?

Not sure Alpha is for you? Click here to read what some of our attendees have to say!

“A year ago, I participated in the Alpha program at the invitation of a friend. During this first experience with the Alpha Course, week by week, little by little, I started yearning not to just “know” more about the Lord, but to be transformed by His Word. Believe it or not, that started to happen. I couldn’t take it in. I kept asking myself, “What is happening to me?” But it was exciting and I was eager to dig deeper. Alpha has given me the opportunity to be spiritually strengthened by others participating in our small group.”
~Annette Allen
"I joined Alpha because I heard that it was a “do not miss” discussion of faith for people with any level of spirituality or just curiosity. One did not have to be Catholic to attend. I did not expect to be drawn into it and keen on revisiting it week after week. Alpha spoke to me in deep and impactful ways even though I am not steeped into theology or deep insights into the Bible. The discussions we had were insightful and listening to each one’s experience or perspective brought a fresh angle to faith. The fellowship that came from Alpha was genuine and warm, and I came away from Alpha feeling that I inherited a new family. I also came away from Alpha experiencing a renewal of faith like I never dreamt when I signed up for it. I strongly recommend Alpha no matter where you are, the impact is tangible."
~Lynn Vincent
"Having the opportunity to serve as a volunteer with the Alpha program resulted in my faith deepening and my Christian fellowship circle widening. Listening to the Alpha app, ‘Bible in One Year,’ is life changing—it’s like having a good friend read the Bible to you and then explain the passages in a way that’s easy to understand!"
~Kristi Moynihan
"Alpha has provided an opportunity for me to share and deepen my faith in a non-judgmental environment. I have become more comfortable with evangelization through Alpha, and enjoy the fellowship derived from authentic conversations and the building of a faith community."
~Julie Dreixler

Click here to read more about what Alpha meant to Annette...

This week, my attention has been continuously drawn toward two things, both touching my heart.
The first has been the subject of, "All Are Welcome." Getting bogged down in man made rules, rather than being welcoming and inviting to others, was the theme of the week. Wherever I looked, somebody was pointing this out, Moses, Jesus, Deacon Pat... I heard from Fr. Mike Schmitz. It was everywhere.
Related to the first, I've been pointed toward the pain political and religious controversies are causing within families and among friends. In conversations, in random emails, even in a conversation between me and myself (in my head), what I have been hearing is, love our neighbors enough to listen to understand. It's easy to have a belief and then find news programs and articles, opinion pieces, and like-minded people who share that belief to strengthen that belief. It's much harder to put yourself in the shoes of the person who has a different belief, a different way of looking at things, and a different experience that has shaped those feelings and attitudes. But, I felt called to do just that. And, by the way, it's not that I suddenly came around to their way of thinking or belief system, it's that I listened with an open heart, and it felt so much better than putting up that defensive wall.
All of this is to say that last night, in an Alpha session titled, "Who is Jesus?" we inadvertently touched on those two subjects. I gained insight by listening with love and understanding. What a difference that made for me and my own personal journey. I am grateful for the conversation and the contributions made by others.
At one point toward the end of the evening, one of our members described a beautiful encounter she had with the Pope several years ago. She spoke about the thrilling experience she and others had, seeing Pope John Paul II from a distance of 200 feet, as he rode by in the Popemobile. She said, "how much greater would that experience be if we saw Jesus!" I felt a little shiver, just thinking about that.
Another nugget I got from the evening was, if we follow the Golden Rule, we are following Jesus, whether we know it or not. "Whether we know it or not" stuck with me. Jesus commanded us to Love God with All Our Heart and to Do Under Others as We would have them do unto us. (Sermon on the Mount, Matthew 7:12). Many of the major religions in the world have a version of this rule, to treat others the way you want to be treated. Why was the topic of the Golden Rule brought up last night, during a week when I am thinking of the rules and how the rules are harming us and keeping us from God? Maybe I'm meant to be reminded there are man-made rules and there are God-made rules.
You just never know what gems will be presented to you during the Alpha meetings, if you listen with openness. The gems send me on a path. I don't fight it, I just let them lead me.

Want to know more about what to expect? Click Here!

A Typical Alpha:
Alpha is run in cafés, churches, universities, homes - you name it. No two Alphas look the same, but they generally have three key things in common:
First, up there's Food:
Whether it’s a group of friends gathered around a kitchen table, or a quick catch-up over coffee and cake, food has a way of bringing people together. It’s no different at Alpha. Most sessions start with food because it’s a great way to build community and get to know each other.
Then a Talk:
The talks are designed to engage guests and inspire conversation. Usually, around thirty minutes long, they can be given as a live talk or played as a video, all for free. They explore the big issues around faith and unpack the basics of Christianity, addressing questions such as Who is Jesus? and How can I have faith?
Followed by a Discussion:
Probably the most important part of any Alpha: the chance to share thoughts and ideas on the topic, and simply discuss it in a small group. There’s no obligation to say anything and there’s nothing you can’t say (seriously). It’s an opportunity to hear from others and contribute your own perspective in an honest, friendly and open environment.

Learn about Alpha in the Catholic Church: 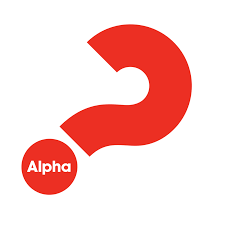 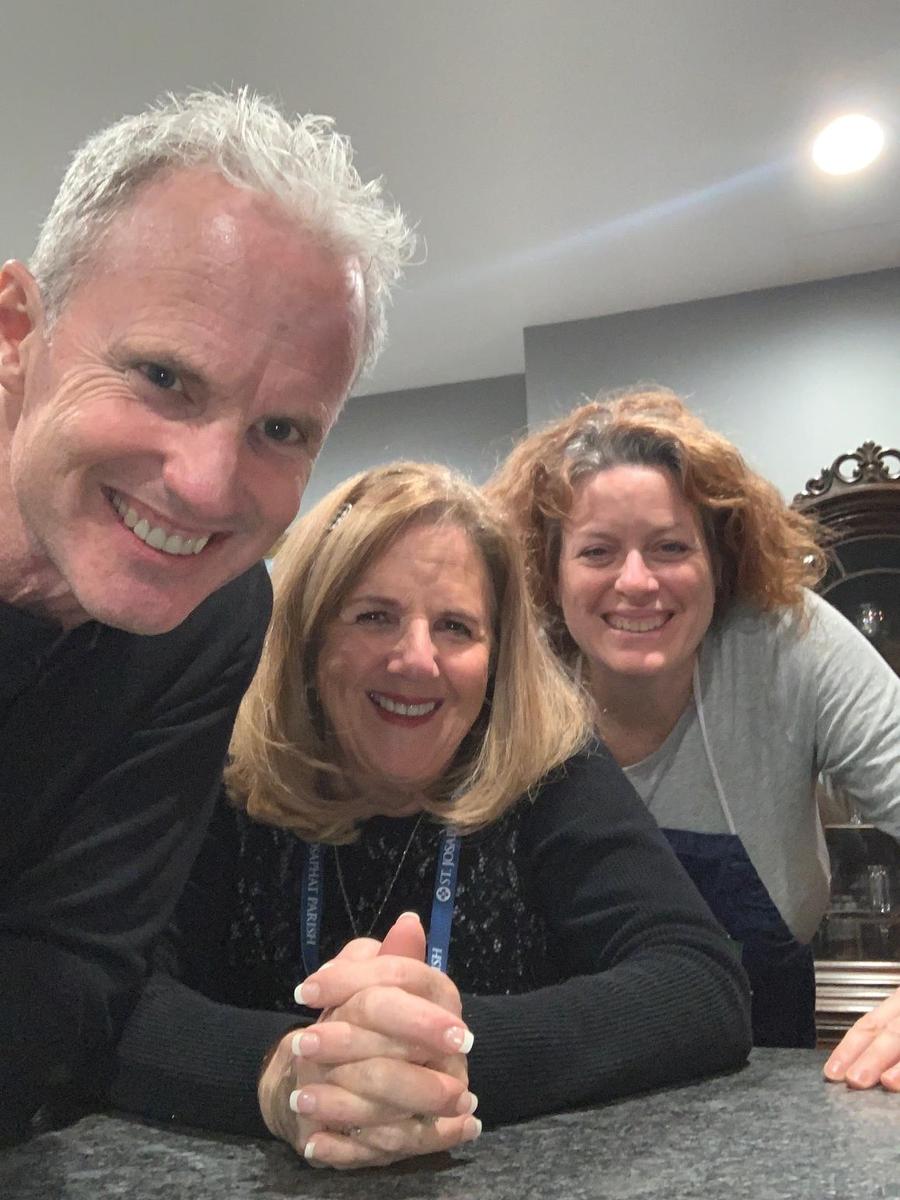