Pray » Stations of the Cross

Stations of the Cross

The First Station: Jesus is Condemned to Die.

Mark 15:12-14: Pilate brought Jesus outside and said to the people, "What shall I do, then, with the one you call the king of the Jews?" "Crucify him!" they shouted. "Why? What crime has he committed?" asked Pilate. But they shouted all the louder, "Crucify him!" Jesus receives the condemning pronouncement. Have you ever experienced condemnation from others: been told you were not good enough; fired from your job as a coach, criticized and made fun of on Twitter. The embarrassment of this experience is almost too much to take. It is humbling, painful and humiliating. What has been the most humbling, painful or humiliating in your experience of sports? All: "Jesus, your strength inspires me. Help me to accept the challenges I face as a coach and Christian with strength and grace."

John 19:16-17: The soldiers took charge of Jesus. Carrying his own cross, he went out to the place of the Skull (which in Aramaic is called Golgotha). Jesus commits to the way chosen for him. Athletes takes up their cross daily when they welcome the monotony of some practices, the repetitions of scouting reports, the dullness of drills. At times these kinds of exercises can seem boring, routine and meaningless but they are a part of my commitment to being an athlete. How can you accept the, at times, monotony and dullness of sports? All: "Help me Jesus to embrace with courage my daily tasks, especially the ones that are burdensome.

Philippians 2:8: And being found in human form, Jesus humbled himself by becoming obedient to the point of death, even death on a cross. Jesus trips up the first time. He is thinking: Can I make it? Will I have enough energy to make it to the end? Will I fall again? As an athlete can I accept my limitations and realize that I will not always get a new move right the first time through or even the second? How can I keep trying when the process of growth or getting better at my sport seems endless? All: As I stumble in life, may I find motivation in Jesus' example of getting back up in the face adversity.

Luke 2:34-35: Then Simeon blessed them and said to Mary, Jesus' mother: "This child is destined to cause the falling and rising of many in Israel, and to be a sign that will be spoken against, so that the thoughts of many hearts will be revealed. And a sword will pierce your own soul too." Our parents/guardians have a way of bearing our pain for us. Have you ever met with a mother of an athlete who has been hurt, who lost a big game, made the error that lost the big game? It is hard for a mother of an athlete to be in the stands and hear the fans ripping her child or see a ref make a bad call against her child? Parents do have a way of bearing this pain. If they can't take it away, they will just be with it. That is what Mary did for Jesus. All: Jesus, help me to show compassion for others and simply "be" with them in their pain and in their blessings.

The Fifth Station: Simon of Cyrene Carries the Cross

Luke 23:26: As they led him away, they seized Simon from Cyrene, who was on his way in from the country, and put the cross on him and made him carry it behind Jesus. As an athlete who is taught to take the pain and not allow others to know they need help, can we be aware of our limitations and vulnerabilities? Can we be open to others reaching out to us and help us? As an athlete, are we coachable? Are we able to take the constructive criticism of our coaches so that we can grow and strengthen our good points? All: Jesus, lead me to a gracious acceptance of where I need assistance and guidance in my life.

The Sixth Station: Veronica Wipes the Face of Jesus

Matthew 10:40, 42: He who receives you receives me, and he who receives me receives the one who sent me. And if anyone gives even a cup of cold water to one of these little ones because he is my disciple, I tell you the truth, he will certainly not lose his reward. Sometimes we like to think we have it all together or give others the impression we don't need help. Can I allow others to mend my hurts and comfort my sorrows, wipe away my tears? Can I allow them to know that it hurts that I messed up in the game? Can I allow another to reflect back to me my weakness and still be okay? All: My prayer is to recognize how I might be a Veronica for someone who needs my care and support. How can I wipe my brother or sister's face in comfort?

Psalm 22:6-7: But I am a worm and not a man, scorned by men and despised by the people. All who see me mock me; they hurl insults, shaking their heads. Imagine you finally manage the courage to get back in the game after sustaining an injury and you get hurt again. Who or what allows one to go out and try it again? Or trying out again after you have been cut from the team. All: Support me Lord in handling moments of failure in my life as integral to my whole journey.

The Eighth Station: Jesus Meets the Women of Jerusalem

Luke 23:27-29 As Jesus walked toward Golgotha, a large number of people followed him, including women who mourned and wailed for him; and he turned to them and said, "Daughters of Jerusalem, weep not for me..." Have you ever been in a losing situation and reached out to another in pain? Pain tends to make us want to go away and hide and cover ourselves up. Here in the midst of his pain, Jesus reaches out to those who were counting on him and yet feel his pain also. Can you get through your own pain or get out of yourself in the midst of feeling downcast because of a loss, an error, an injury? All: Enable me to see the Compassionate Christ in my life and be the Compassionate Christ for others.

Psalm 22:14: I am poured out like water, and all my bones are out of joint. My heart has turned to wax; it has melted away within me. Have you ever felt the feeling of wanting to quit because things are just not going your way? You have persevered through some tough times and almost made it but the pain comes back. You were once the "go-to-person" on your team, but this is not the case now. You were an all-star and now you are not seeing any playing time. But deep in your gut, you know you can't quit. Who or what can give you the courage to go out there one more time to get it right? All: Give me the gift of persistence so that I might persevere to become more like you, Jesus.

The Tenth Station: Jesus is Stripped of His Garments

Mark 15:19: Again and again they struck him on the head with a staff and spit on him. They stripped off his clothes and began to mock him, saying: "All hail, King of the Jews." There can be times when our integrity or dignity can be stripped from us during a game. Think of a time when you could have reacted to being called a name or responded to a well-aimed elbow and did not. What prevented you from acting out violently? How do you take Jesus' example to turn the other cheek? All: Grant me the courage to stand up against injustice in my world.
The Eleventh Station: Jesus is Nailed to the Cross

John 17:19: Carrying his own cross, he went out to the place of the Skull (which in Aramaic is called Golgotha). Here they crucified him, and with him two others—one on each side and Jesus in the middle. There are times when hurt, pain, injury need to be endured. How do you deal with the hurt and pain (emotional and physical) that are a part of a season or a career? All: Empower me Jesus with the virtue of fortitude to endure hardships.

The Tweltfh Station: Jesus Dies on the Cross

John 19:28-29: Later, knowing that everything had now been finished, and so that Scripture would be fulfilled, Jesus said, "I am thirsty." A jar of wine vinegar was there, so they soaked a sponge in it, put the sponge on a stalk of the hyssop plant, and lifted it to Jesus' lips. When he had received the drink, Jesus said, "It is finished." With that, he bowed his head and gave up his spirit. The inevitable thing has finally happened: your playing career has come to an end. Whether it is because of an injury or getting cut or your eligibility has been exhausted, you playing time is done. How do you say goodbye to your career? Are you angry? How will you deal with this? All: When all seems lost, sustain me, Jesus, in your mercy.

The Thirteenth Station: Jesus is Taken Down From the Cross

John 19:33-34: When the soldiers came to Jesus and saw that he was already dead, they did not break his legs, but one soldier thrust his lance into his side, and immediately blood and water flowed out. In the heat of the moment of a loss or a significant error or turnover, is it possible to remain calm and peaceful? Rather than display violence, can you participate without partaking in negative behavior? All: Love is the greatest commandment. May my life be rooted in love and service for others.

The Fourteenth Station: Jesus is Laid in the Tomb

John 19:38-41: Later, Joseph of Arimathea asked Pilate for the body of Jesus. Now Joseph was a disciple of Jesus, but secretly because he feared the Jewish leaders. With Pilate's permission, he came and took the body away. He was accompanied by Nicodemus, the man who earlier had visited Jesus at night. Nicodemus brought a mixture of myrrh and aloes, about seventy-five pounds. Taking Jesus' body, the two of them wrapped it, with the spices, in strips of linen. This was in accordance with Jewish burial customs. At the place where Jesus was crucified, there was a garden, and in the garden a new tomb, in which no one had ever been laid. Because it was the Jewish day of Preparation and since the tomb was nearby, they laid Jesus there. Hope is a wonderful stance, a gift from God. Have there been times when you were really down-and-out and at the last moment of the game, something happened that saved the game? Can you be patient enough to wait for God's great surprise to work for your game, your life? All: Jesus, help me to rest in the uncertainty of my future knowing that if I stay rooted in your love and energized by your grace, I will be your worthy disciple. 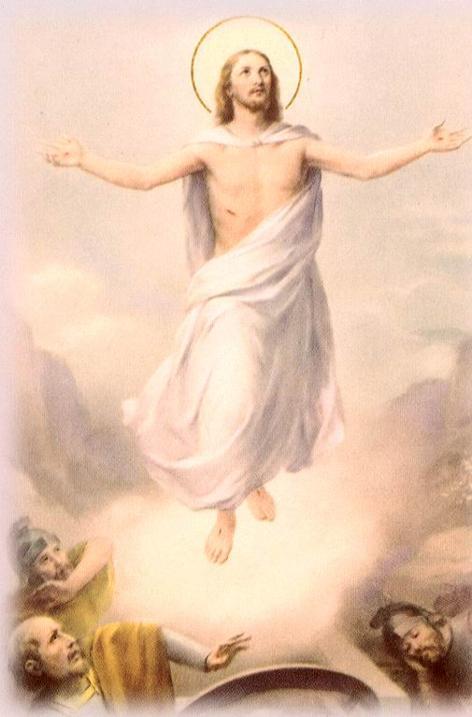 Luke 24:4-6: Then suddenly two men in clothes that gleamed like lightning appeared next to the women who had come to anoint his body. The men said to them, "Why do you look for the living among the dead? He is not here; he has risen!" Sport is a means of recreation or "re-creation" in body, mind and soul. Sport, when conducted in the right environment, can transport us beyond the ordinariness of daily life and help us reach transcendence with Christ. How do you put sport in this broader context and keep your perspective there? All: Lord, grant me the virtue of temperance to understand sport as a spiritual gift in my life.